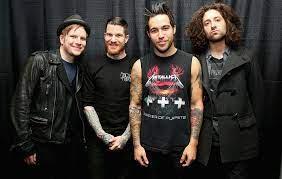 Twin Skeleton’s (Hotel in NYC) by Fall Out Boy: Lyrics Meaning And Interpretation

Twin Skeleton’s (Hotel in NYC) is a song that was released in 2015. This was the sixth studio album of the American rock band. Twin Skeletons lyrics meaning makes this song absolutely beautiful. This song was the closing song of the album “American Beauty/ American Psycho”. This song holds a very special place on the album. According to the creator of the album, this song is the “wink right before fin”.

To understand the Twin Skeletons lyrics meaning, you need to have a little knowledge about the creators. The band, Fall Out Boy, was created in the year 2001 in Illinois, Chicago. The members of the group include – Patrick Stump (lead vocalist and rhythm guitarist), Pete Wentz (bassist), Andy Hurley (drummer), and Joe Trohman (lead guitarist). They released their first successful album in 2005 named “From Under the Cork Tree”. Two singles from that album hit double platinum and made the band well known to people all over the world.

The band kept releasing albums in the following years. Their sixth album, “American Beauty/ American Psycho” was announced in 2014, but it was released in 2015. This album was also a big success. It debuted as No.1 on the US Billboard Top 200 list.

Twin Skeletons lyrics meaning explains a love story. The creator of the song himself said that the song signified love. The song talks about how nothing in the world makes sense, how everything in the world is temporary and nothing lasts. But, somehow, with his lover, things make sense. Lying next to his lover and doing absolutely nothing makes sense. The singer also goes on to say that everything in his life makes more sense when he is with his lover.

The name of the song also finds reference to the cover art of their 2009 album “Believers Never Die”. If you look at the cover of the picture, you will be able to understand the significance of the title of the song. In the cover photo of the 2009 album, two skeletons are found in an old room where both the skeletons are holding each other’s hands. Twin Skeletons lyrics meaning explains the deep desire of the singer to stay with his lover forever. He does not want his lover to be a temporary part of his life. Rather, he wants to lay beside his lover forever even when their life ends and the body turns into a skeleton.

The title of the song signifies how the singer wishes to be a twin skeleton of his lover. The singer also wants to prove that even death cannot keep him apart from his lover. The hotel is a destination, it is the place where people come back to take a rest after having a tiresome day. The hotel also signifies the end of the day or the end of life. The twin skeleton found at the hotel in NYC shows that the singer and his lover have lived their lives. But at the end of the day, they were destined to be together and even death wasn’t strong enough to keep them apart. Their skeleton is found in an old hotel room in NYC where both are still holding each other’s hands.

There’s a room in a hotel in New York City,

It shares our fate and deserves our pity.

I don’t want to remember it all,

The promises are made if you just hold on,

The chorus of the song has the whole essence and also is the key to understanding Twin Skeletons lyrics meaning. In the first two lines of the chorus, we find a reference to a hotel room. This hotel room is probably the one that is situated in New York City. A hotel is a place where people come back and take a rest. It signifies the destination of the day. In the first two lines of the chorus, the singer wants to say that the hotel room holds a lot of memories. But, he and his lover share the same fate.

In the third line of the chorus, the singer also says that he does not want to remember all the things that he and his lover have shared in the hotel room. Rather, he wants to remember the promises that both made to each other. The significance of singing “hold on” 5 times portrays how much the singer wants to hold on to the promises that he and his lover made. He wants their promises to be together forever, even when they are dead.

I just need enough of you to dull the pain,

To get me through the night until we’re twins again,

Until we’re stripped down to our skeletons again,

Until we’re saints just swimming in our sins again.

Keep making trouble ’till you find what you love,

I need a new partner in crime and you’re my shotgun.

The first verse of the song also explains Twin Skeletons lyrics meaning beautifully. In the first line of the verse, the singer or the narrator knows that his lover can act like a drug and take away all his pain. He knows that being with his lover will numb all his problems and help him escape from the hardships of the real world.

The second line of the verse explains how badly the singer wants to be with his lover and be a twin. Like people who have been together for a very long time behave similarly, even he wants his lover to stay with him for so long that they become a twin. In the next line, he also goes on to say that he wants to become a skeleton with his lover. This could also mean that they wouldn’t have to pretend to be anybody else in front of each other.

The singer also goes on to say that saints make no sins, but in their past they have surely committed some sin including sex. That is exactly what the singer is indicating by saying that he wants to swim in his sins again. He then talks about how the crows are flying over their head signifying bad omen. This shows whether he and his lover is going to die or they are going to face some problems. Lastly, he also gives a little advice and says that one should not give up and find what they love no matter how hard it seems.

A birth and a death on the same day,

And honey I only appear so I can fade away.

I wanna throw my hands in the air and scream,

And I can just die laughing on your spiral of shame.

Hit it, never quit it, I have been through the wreck,

Verse two of the song gets interesting. The singer says that if birth is to be celebrated and death is to be mourned. Then what will happen if the birth and death take place on the same day? What if when the person dies, the soul gets transferred to another body immediately on the same day? The next lines also show contrasting thoughts in his mind. He talks about throwing his hand up in the air, which is an act of joy. And then screaming, which is an act of anger. He talks about how he could die, signifying sadness, but he could die of laughing, indicating joy. This shows how confused he is.

In the song, Twin Skeletons lyrics meaning explains a love that goes beyond the mortal land and stays forever. The song successfully reaches the heart of the listeners and leaves them mesmerized. The song’s power of connecting with people on an emotional level has made it a hit.