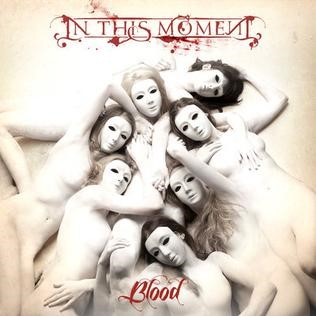 This article explores “in this moment blood lyrics meaning”, by peering into the Band & its motivations. In this Moment is a Los Angeles based Alternative Metal Band fronted by Maria Brink. The 5 member band had many lineup changes but the two founding members I.e. Maria and Chris Howorth continue in it.

After its formation in 2005, the band headlined major festivals like Download, Ozzfest, Mayhem, Warped Tour and Uproar among others. They released their first Album in 2007, but this song is from their 4th studio Album called Blood. Prior to Blood, the Band did not profess a distinctly unique sound. It had the elements of an entertainer, but it had not reached a level of global recognition.

After the release of Blood, the somewhat operatic style of Maria & the riffs of Chris entered into a distinct blend of alternative patterns that were new to the Genre. The words also elevated to a layered texture that did not compromise the simplicity of the lyrics.

Blood was a break-away sound from traditional influences of Metalcore and it showed the evolution of the band till its launch in 2012. The popular title track of the same name ushered the album into a certified Gold category. Even today, it is considered one of the best works of the band,

It signifies the duality of the life-giver and the intent to take the life or life force of another. How the giving of blood is metaphorical to giving birth & sacrifices for the loved ones are about keeping their hope alive.

The “in this moment blood lyrics meaning” may appear to be straightforward and violent, but the message is explicit. It is about appreciating the blood of people who love and their sacrifices.

I hate you for the sacrifices you made for me

I hate you for every time you ever bled for me

I hate you for never taking control of me

Written in 1st person, this verse is about the anguish of hating all that has been done for an individual. Maria sings about the way a person’s self-loathing manifests into hatred towards others.

I hate you for always saving me from myself

I hate you for always choosing me and not someone else

I hate you for always pulling me back from the edge

I hate you for every kind word you ever said

She claims to hate those who sacrificed for her. She also hates people who protected her by bleeding instead of her, for letting her free & keeping her a priority over others. Additionally, she loathes the kindness and caution shown by others toward her.

Thematically, it could be the story of a child towards parents or a lover going through a tough time. Either way, the words carry the underlying guilt of feeling unworthy of the affection of others. It also implies that the singer wishes to be rejected so that she can go over the edge and destroy herself.

This is a single powerful line where the singer states the eventuality of bleeding the loving parent or person of every ounce of blood. Hence the emphasis on the phrase “bleed you dry”.

It also represents the frustration of the singer as the cause of the destruction of a good-hearted person.

The lyrics present the catch 22 situation where a good person would suffer for not helping and also suffer upon helping another.

The words express a lack of self-worth in the singer who feels that she is intentionally destroying the other person.

Shut your dirty, dirty mouth, I’m not that insane

I’m a dirty, dirty girl, I want it filthy

Now the band implies that the helper should quit pumping blood in her, quite helping her to live. Instead, she could be buried like the dead, with mud in her body and veins full of it.

Within the chorus, the words also admit that it is not easy to save, rehabilitate or help. To her, all the words of hope sound dirty and bad. It is only a matter of perspective, but the fear of destroying another makes it all feel dirty.

Shut your dirty, dirty mouth, I’m not that insane

I’m a dirty, dirty girl, I want it filthy

Ironically, the desire to push away those who love implies certain goodness in the singer. By spelling out hate and seeking isolation or death, it is possible that other people see it as a good-hearted nature of the singer.

This irony may also imply that the expressions of hatred may attract the love that would inevitably lead to mutual destruction unless the singer accepts the goodness within her.

I love you for everything you ever took from me

I love the way you dominate when you violate me

I love you for every time you gave up on me

Perhaps the singer realises this irony and changes the words from those of hate to those of love. Now she blames the other person for all that he took away from her. This implies that she may have committed herself to this relationship and it is his fault for taking what she offered.

She then compares his initiative with violation and dominance. In a way, she says she loves him but expresses passive aggression by shaming his attention. She labels his despair as giving up and also calls him an outright liar.

I love you for never believing in what I say

I love you for never once giving me my way

I love you for never delivering me from pain

I love you for always driving me insane

By the second paragraph, she surrenders to him. She quits the hostility towards him and says that she loves him. Her reasons are aplenty. For one, he believes in her recovery. For another, he doesn’t concede to her and carries on, even when she has no deliverance from pain. She concedes that she acts this way due to insanity.

By the end of the song, she returns to the pre-chorus and chorus like a mad person.

“{In this moment blood lyrics meaning” spells out an inner conflict when a person does not want to be saved. This conflict may emerge in a child, addict or unwell person who feels like a burden. Such a person may try to belittle & shame the helper with the intent of scaring them away. The beauty of this song lies in explicit emotions with implicit storytelling. This makes it applicable to any listener. it becomes easy for anyone in the audience to relate to the situation & feel the anguish of seeing the self as a burden on others.