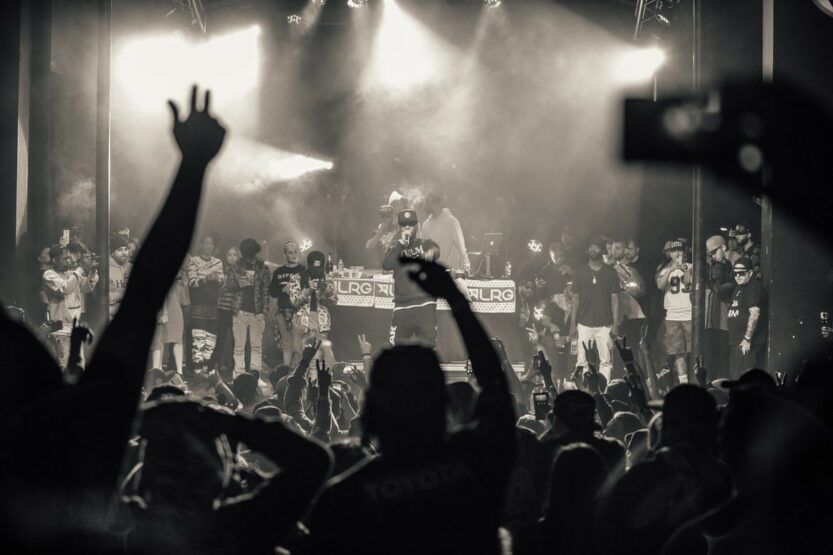 If one was to talk about the foundations of old school as well as modern Hip Hop, one group will definitely come up in the conversation. That group is none other than Run DMC. In 1983, Jason Mizell, Joseph Simmons, and Darryl McDaniels came together to form a pioneering rap group. They not only elevated the status of rap by adding a touch of funk and jazz, but also introduced a more integrated role of the DJ in their art. The likes of Rakim and Eric B that would go on to revolutionize Hip Hop later on and more like them that placed their DJ in a very important position all owed their existence to Run DMC.

Another important thing to note was that the industry did not favour black musicians at that time. Racism was at its peak, and the Afro-Americans suffered a lot in the Ghettos. Thus, when Run DMC achieved the feat of having a gold record, it was big news for the community. Just a year later in 1985, their second album was certified platinum. And their most influential album “Raising Hell” which included iconic tracks such as “It’s tricky”, “Peter Piper”, and “Walk this Way” was certified multi-platinum.

This entire song is an ode to the DJ of the group, Jam Master Jay. According to many old-schoolers, this type of rap has its roots in house parties. People would get on the mic and rhyme praises for their DJs who would be rocking the parties with their skills. This song is a perfect example of that, but on a professional and bigger level. The song is titled “Peter Piper” which is a combination of Peter Pan and Pied Piper, both of which are popular children’s tales. The whole song features Run DMC referencing to various iconic children’s tales, stories, and rhymes. This song which is included at the beginning of the album is more of a brag track about the group’s rhyming as well as DJ-ing skills.

Jack B. Nimble was nimble and he was quick

And Alice chilling somewhere in Wonderland

Jack’s serving Jill a bucket in his hand

And Jam Master Jay’s making all that sound

The turntables might wobble, but they don’t fall down”

Another interpretation of the title is that the group is referencing to the popular tongue twister of the time, Peter Piper. The first line is the beginning of a tongue twister, and the group included it to portray their skills with words. In the first half, we get to see references to a lot of characters famous among children including Humpty Dumpty and Jack B. Nimble. Run compares Jam Master Jay’s speed with Jack B. Nimble, a character that is included in a poem about his quickness. The second half of the song again features a variety of children’s tales such as Alice in Wonderland, Rip Van Winkle, Jack and Jill, and Little Bo Peep. The whole verse compares the greatness of Jam Master Jay with characters that are popular among children. This gives the song a fun and free vibe. Thus, on an album that is primarily about Black Power, racism, and the issues of the black community, this song provides a fun relief. Moreover, it makes for quite a party song.

“Now Dr. Seuss and Mother Goose both did their thing

But Jam Master’s getting loose and D.M.C.’s the king

He’s the better of the best, best believe he’s the baddest

Lot of guts, when he cuts, girls move their butts

His name is Jay, hear the play, he must be nuts

He’s not Flash, but he’s fast and his name is Jay”

The second verse again features a variety of children’s tales characters such as Dr Seuss, Mother Goose, etc. The second verse confirms that this track is essentially a brag track about the skills of the group. Moreover, it starts a trend of rappers acknowledging and praising their DJs in their songs. This is apparent in the songs of Rakim and Eric B. In the middle of the verse, Run also claims that Jam Master Jay has the ability to make amazing party tracks by using the line – “when he cuts, girls move their butts”. By cuts, he means the act of cutting a record while it’s playing. ‘Crossfader’ is a term that DJs are all familiar with. It refers to the act of increasing or decreasing the audio signal gradually. Run also mentions Jay’s mixing skills, which truly set apart DJs in the rap world. In the last line, Run references the DC superhero Flash. He doesn’t conflate the identity of Jam Master Jay with someone else, but claims that he’s almost as fast, if not equal, as Flash.

Everything that he touch turn to gold

He’s the greatest of the greater, get it straight, he’s great

Playing fame ‘cause his name is known in every state

His name is Jay, to see him play, will make you say

“God damn that DJ made my day”

He’s a maker, a breaker, and a title taker

Like the little old lady who lived in a shoe

If cuts were kids he would be due

Not lying y’all, he’s the best I know

And if I lie my nose will grow

And you all know how the story go”

The first line is reference to the Greek tale about King Midas. King Midas was a person who could turn anything into Gold by just touching it. By likening Jay to Midas, Run implies that any track that features him can easily be certified gold. The rest of the verse is filled with praise for Jay, and Run showcases his rhyming skills that would set the tone for the rest of the album. Moreover, with rhymes such as “maker, taker, breaker”, any Hip Hop fan can recognize the distinct style of Run DMC. Towards the end of the verse, he again references several children’s tales such as Pinocchio and Old Lady and the Shoe.

“Tricks are for kids, he plays much gigs

He’s a big bad wolf in your neighborhood

It’s the chorus that makes the group seem threatening, which is more befitting of a rap group in the late 80s. Again, Run uses children’s tales to get his message across. He claims that Jay is like the Big Bad Wolf of the rap game. In the last line, he explains that by ‘bad’, he doesn’t mean that Jay is evil, but that he is good at what he does.

D’s not Hansel, he’s not Gretel

Jay’s a winner, not a beginner

His pocket gets fat, others get thinner

Only in the last verse does Run mention the group as a whole. He establishes the credibility of Run DMC as a whole. The last verse includes references to tales such as Hansel and Gretel. He says that Jay is not a beginner and that is very accurate as Jam Master Jay started playing instruments when he was only three years of age! At the end of the verse, he directly acknowledges the fact that he has been referencing fairy tales throughout the song.

For any individual who considers himself a fan of Hip Hop, this song is a must-listen. To know about the culture and where it all originated, one has to know about this song as well as the album that it was included in. Moreover, one has to listen to pioneers such as Run DMC who inspired everyone in the game.