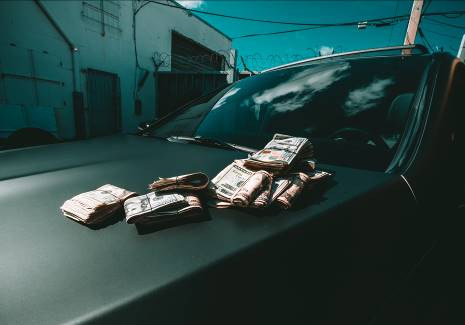 Magnolia is a trap song by rapper Playboi Carti. Released in 2017, the song was a massive hit. Before understanding the Playboi Carti Magnolia lyrics meaning, you should learn about its title.

Magnolia refers to the Magnolia Projects in New Orleans, where the rapper Playboi Carti grew up.

With the title explained it is time to discover the Playboi Carti Magnolia lyrics meaning.

Yo, Pi’erre, you wanna come out here?

This intro serves as a shout-out to the producer of the record, Pi’erre Bourne. The beats in the entire track were provided by Bourne. Actually, this line is a sample picked up from a TV show called The Jamie Foxx Show from the 1990s.

Hide it in my sock (Sock)

The term “Milly Rock” refers to a dance move that become popular in 2015. It was created by rapper 2Milly and was widely performed by kids on the streets of New York.

Going with the same vibe, Playboi Carti cruises the streets of New York like he is “Milly Rocking”. There is a twist here. The word “Rock” could also be slang for crack cocaine. This song glamorizes the thug life, filled with drugs, sex and hedonism. Carti is telling the listeners that he carries crack cocaine in his sock wherever he goes. He is always ready to party.

Running from an opp (Opp)

These lines describe the gang violence culture synonymous with hip hop. “Opp” means opposition, which could refer to anybody from a rival gang, group or clan.

Gangs are very territorial and usually keep to their turf to avoid confrontations. But Playboi Carti is too cool to play by the rules. He has the courage to break into rival territory, or “block”. If anybody from the enemy team tries to affront him, Carti will literally “shoot at” them to assert his dominance.

Hide it in my sock (Woah)

Used to sell rerock (What?)

Runnin’ from the cops (Woah)

Shootin’ at these opps (Woah)

Playboi Carti is repeating himself. He loves his drugs and is all about the gangster life. In the past, before he became a professional rapper, Carti used to sell crack cocaine. The term “rerock” refers to converting cocaine into its rock form, that is, crack cocaine.

Naturally, he was in competition with other dealers and gangs. But he survived and now thrives with his music while doing his drugs and dancing the “Milly Rock”.

Yo, Pi’erre, you wanna come out here? (Woah)

Shooting at these opps (What?)

Not only does Playboi Carti have the courage to enter the rival gang’s territory, he also has the audacity to take away their women. Carti enters the enemy turf in style, driving a “drop-top”, which is slang for a convertible car. This phrase was made popular in the 2016 hit song ‘Bad and Boujee’ by Migos.

The matter is not as simple as taking the rival gang’s women away. Carti also makes the ladies “give him top” which means, perform oral sex on him. He lets the roof of his convertible drop to show off to his rivals, perhaps without the consent of the women involved in the act.

When I drop, yeah (Drop, drop)

When I drop, yeah (Drop, drop)

To woo all the women in the “block”, Playboi Carti does not need to inflict violence or showcase his power. His music alone will do the trick. The moment he drops his music single, all the “hoes gon’ flock”. The term “hoe” is slang for prostitute or slut. In recent times, “hoe” is also used to describe (distastefully) women in general. Carti’s music is so amazing that women rush to get a piece of him.

All these hoes want cash (Cash)

All these hoes want bags, uh

Fucking on your bitch (Beep), uh

The girls that Carti’s music attracts are obsessed with money and luxurious things. Playboi Carti assumes that “hoes” only long for fancy bags and loads of cash to experience a lavish lifestyle. These girls will even leave their man, boyfriend or husband to be with Carti since he can provide them with luxury.

In that sense, Carti becomes their “dad” which is short for the term “Sugar Daddy”. A sugar daddy is a rich man (usually older) who gets around with a lot of pretty girls by using his money and influence.

Playboi Carti accuses many new rappers of trying to copy his unique style. The rapper is also known as “Cash Carti” and thinks that the newer generation of rappers need to find their own individual voice.

These lines also hold the essence of the Playboi Carti Magnolia lyrics meaning. In the city of New Orleans, the Magnolia Projects are infamous for rampant gang violence. Playboi Carti grew up in these projects and as a result has developed a hardy nature. He is a “soldier” who will not accept defeat easily. This also serves as a warning to his enemies and rivals.

Bitches on me (What? Beep) say she like my clothing (Yeah)

I’m in London (What?) Yung Carti global (What?)

Designer is on me (Phew) call it dirty laundry (Phew)

In these lines Playboi Carti refers to his fashion sense. The world of fashion and style took notice of Carti’s dressing sensibilities when he entered the music scene. Magazines like Vogue and Wmagazine have complimented Carti on his style.

Yung Carti, Yung Carti (What? What? Hold on), yeah

All of your bitches, they loose, hold on

All of your bitches, they loose, hold on (Yeah)

“Yung Carti” is another name that Playboi Carti goes by. Due to his popularity, women are crazy for him. They are willing to go the extra mile and offer whatever he wants because “they loose”.

All of my bitches, they rich, hold on

And they stay rockin’ that Rick, hold on

Playboi Carti refers to the clothing brand Rick Owens here. He confesses his love for the brand and how the women he hooks up with automatically assume he is rich because he is “rockin’ that Rick”.

Got a rich clique (Hold on)

She suckin’ on the dick (Yeah)

Give that ho a tip (Yeah)

Told her, “Buy some kicks” (Kicks)

A clique is a tiny group of people, brought together by a common interest. For Playboi Carti, his clique is bound by money and luxury. He also explicitly describes the sexual acts he performs on his female friends. But he also treats them nice with money, offering to buy them “kicks”, which is slang for shoes.

Ooh, then I brush my teeth (What?)

Hop up in the whip

Glocky in the whip (Skrrt)

Glocky in the whip (Yeah)

And I’m cocky, fuckin’ on a thotty

She just wanna plot me, bitch can’t stop me (Stop me)

This ain’t even my Masi (Nah)

Hope that’s not your thotty (What?)

Carti continues to describe his outrageous lifestyle, which includes shooting people with a Glock, riding a Maserati and hooking up with women.

Walked in with Ashanti (What?)

I think that be Yung Carti

Heard he spent a hundred on a fucking watch piece, that’s filthy (Phew, what? Woah, woah)

R&B singer Ashanti is referenced in these lines. Playboi Carti is trying to emphasize that he hangs out with beautiful women like Ashanti. He also passes a snide remark on the filthy rich who can afford to spend 100K on a single wrist watch.

You know what I’m sayin’?

Yo (Yeah), Pi’erre, you wanna come out here?

The true Playboi Carti Magnolia lyrics meaning can be found in the rapper’s lifestyle itself. This song boasts of Carti’s accomplishments and his glory as a rapper.